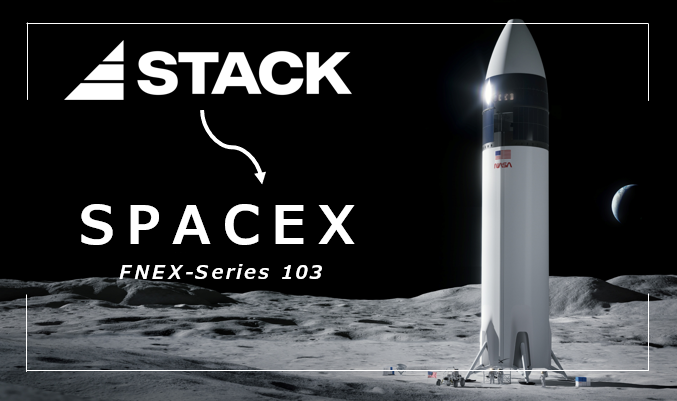 spaceX
THE SPACE RACE IS ON AND WE'RE LAUNCHING OUR BET
‍‍

Stack Capital has gained exposure to SpaceX through FNEX Ventures - Series 103. SpaceX is one of the largest and most prolific private technology companies in the world, which holds a leadership position in the emerging “space economy”.  The company currently has three main business lines, each of which offer attractive long-term growth potential.

1) Space Transportation
Its core space transportation business, where the company has established strong ties with government agencies such as NASA, is under contract to deliver valuable cargo to the international space station.  The ability of the company to re-use rockets, thereby lowering cost per ton to orbit, provides a significant advantage and vastly improves the operating economics for the business.  The following chart, which illustrates recent bid characteristics between Space SPV and two of its main competitors for a NASA contract to transport astronauts back to the moon, is a great example of its cost advantage:

The company has also brought to market a ride sharing platform that allows companies looking to fly payload into orbit to essentially hitch a ride on their rockets. Companies enjoy the option of picking payload weights and travel dates as opposed to relying on the primary customers launch date.  These types of rideshare missions serve as away for the company to capitalize on the boom of small constellations being put into orbit.

2) Space Tourism
The civilian space tourism industry is another of the company business lines with growing demand.  The company recently completed a successful and historic all-civilian mission in September 2021 where it safely returned its spacecraft from orbit.  The success of this mission represents a significant milestone for the long-term travel and tourism growth ambitions of the company; however, the business remains in its infancy.  While we believe this portion of overall company business is compelling over the long term, it will require significant time and financial resources to monetize. The economics associated with flying an individual into space needs to come down considerably before broader adoption can realistically be accomplished.

3) Satellite Communications
While the space transportation and tourism business lines are attractive, the satellite communications business is projected to represent the largest driver of value creation in the coming years, bringing fast internet service to areas that are unserved or underserved. Currently, Beta services are operating in 17 different countries including the US, UK & Canada - with satellite service scheduled to come out of Beta in approximately a month.  Two main areas of interest include rural broadband access and autonomous vehicles:
‍
o   Rural Broadband: Today, an estimated 3.9 billion people worldwide do not have an internet connection.  While not all those individuals are putting in a pre-order for satellite services offered by the company, we do estimate that there are roughly 70 million people in rural areas who would be willing to pay for such a product. We believe adoption also has the potential to be accelerated as the work from home trend continues to be embraced by large employers worldwide.  One of the remaining pain points involved with working remotely has been reliable access to internet, however, with download speeds of +150 mbps, the satellite service offered by the company solves this problem and enables employees to work productively from otherwise remote locations.  In addition, its worth noting that the FCC has awarded the company with $885 million in subsidies to help bring internet to rural areas within the US.
‍
o  Autonomous Vehicles/Maritime/Aviation: Self driving cars will be a big source of additional data in the future and car companies are looking to partner with satellite companies to gain access into this market.  For an autonomous car to be able to travel across the continental US, connected vehicles will require another data provider, for redundancy, to travel from LA to NY as several “dead spots” exist along the journey.  Having satellite communication in those “dead spot” or “drop off” areas will provide assurance that an autonomous vehicle can successfully handle the journey.


Today, the satellite communications business has approximately 1,800 satellites in orbit serving around 100,000users; meanwhile, the company continues to build out its global network of satellites, strengthening its near global coverage.  The long-term goal for the company is to have a blanket of over 40,000 satellites to cover the entire world.

The elephant in the room, however, that needs to be addressed is why the satellite communications business model will work, when all its predecessors have fallen victim to failure.  It takes billions upon billions of dollars to launch a constellation into orbit before a company stands to make any revenue and this is the genius of the business model adopted by the company – unlike others, it ‘started’ with launch capabilities. The ability of the company to launch a rocket in the air and land it on a postage stamp is an incredible accomplishment, and this skill has allowed the company to drastically reduce the cost of launching satellites into orbit.

Another key point to consider when evaluating the business is the cost associated with producing the satellite itself.  By focusing on a low earth orbit constellation, the company can build many satellites that cost significantly less than the multi million-dollar satellites previously launched into the geostationary orbit.  Lastly, in a world where consumers are using more and more data and where connectivity is a must, satellites are the only viable long-term solution for consumers who reside in remote areas.

In summary, this exposure to SpaceX exemplifies the type of innovative and disruptive private business that Stack Capital seeks to invest into.  As the world’s largest private aerospace manufacturer, space transportation services, and satellite communications company – the opportunity to gain exposure to this business for the long-term benefit of shareholders is compelling.  We remain very bullish on the prospects for its satellite communications business over the coming years, and we applaud the company’s decision to focus on launch technology to help decrease the cost to go into orbit.  This has allowed the company to build a satellite constellation that we believe will ultimately result in a large amount of free cash flow for shareholders, which can be utilized to help fuel the growth of the broader business.  While there have been hints that the satellite communications business could be a potential IPO candidate in the future, we’re very excited to give the shareholders of Stack Capital the ability to own a global telecommunications provider in the meantime!

Successful leadership
‍·      The experienced management team and its diverse background in both technology and space development provides the business with a distinct edge
over the competition
·      Key members of its management team draw on valuable work experience from several recognized and successful organizations such as PayPal, Tesla,
and Boring
·      Management’s success has given the company a cost of capital advantage that is unmatched in the space industry