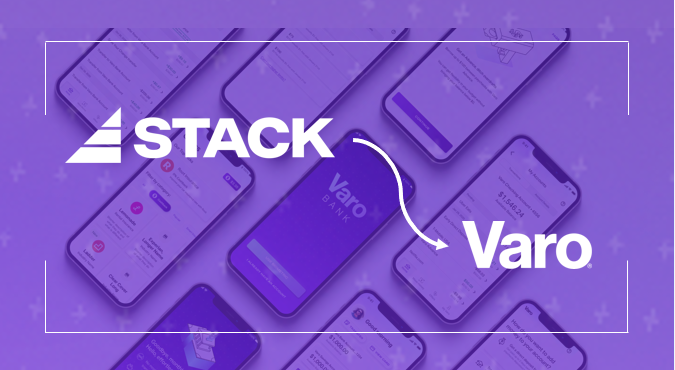 varo MONEY, INC.
THE FIRST AND ONLY FINTECH WITH A US BANK CHARTER
‍‍

Based in San Francisco, California, Varo Money, Inc., and its subsidiary Varo Bank, N.A. (“Varo”), a member of the 2021 Forbes Fintech 50 list, and No. 7 on the Inc. 5000 list, is the first all-digital bank in the United States to secure a national bank charter allowing it to offer more products, including loans, to its clients – unlocking superior unit economics.

Stack Capital believes that Varo has established a strong foundation for future growth by virtue of being the only challenger bank in existence with a banking charter and having already successfully built a world-renowned banking application.  The significance of the banking charter cannot be over-stated; as opposed to “borrowing” the license of another chartered bank in the US, Varo has its own and, as such, eliminates the need for an intermediary, which affords the business a material economic and strategic advantage over all other peers.  Eliminating the need for a bank sponsor also gives Varo direct access to the national payment system; meanwhile, having its own banking license provides Varo with increased lending capabilities and the opportunity to offer alternative investment products to fuel future growth.

Varo's mobile-first structure with no physical branches, lowers the cost to serves and enables the company to operate without charging its clients overdraft fees, or requiring minimum monthly balances, representing a significant competitive advantage over traditional financial service providers. Varo's target market consists of roughly 180 million "battler and builder" banking clients who historically have been over-charged, under-served, or left out entirely by existing financial service providers.
‍
‍Varo has also built an impressive management team led by ColinWalsh, a former American Express executive who made the call early in Varo’sdevelopment to seek a US national bank charter. Mr. Walsh has surrounded himself with an experienced and accomplishedexecutive team who collectively will help propel Varo forward.

Stack Capital is very excited to participate in this round of financing and believes that Varo is at a growth inflection point, having already achieved product market fit without utilizing extensive marketing resources.  In the last 13 months, Varo has tripled its revenues and doubled its number of new accounts to four million.  Today, Varo offers checking accounts with access to two-day early pay day, savings accounts with easy autosaving tools, fast and accessible short-term credit with Varo Advance and a rewarding cashback program with Varo Perks. The bank charter allows Varo to expand into a broad array of integrated products nationwide, including retirement accounts (ie. IRAs), credit cards (ie. the upcoming Varo Believe card), home equity loans and more.

Varo plans to use its recent Series E capital injection of $510 million USD to accelerate the growth of its user base, brand, and overall business.  This recent Series E round was oversubscribed and included several prominent private equity funds and hedge fund investors.


INVESTMENT OVERVIEW
‍
Only challenger bank in the US with a banking license
‍·        Critical point of differentiation for Varo; as opposed to “borrowing” the license of a chartered bank in the US, Varo holds its own which provides the business
with a significant economic and strategic advantage overall other fintech peers
·        Great first mover advantage – Varo has eliminated the sponsor bank intermediary, and now has direct access to the national payment system
·        Holding its own bank-chartered license affords Varo the ability to increase its lending capabilities, and offer investment products such as crypto trading,
robo-advising, and fractional share ownership moving forward

‍Attractive market opportunity
‍·        Estimated 180 million “battlers and builders” target clients in the US that Varo is uniquely positioned to serve
·        Colin Walsh (CEO) has Varo laser-focused on this target market; a demographic which incumbent banks have either neglected or struggled to serve to date

‍Experienced Management Team
‍·        Varo’s experienced leadership team, and its diverse background in both technology and banking, provides the business with a distinct edge over the
competition
·        Specifically, key members of Varo’s management team draw on valuable work experience from several recognized and successful organizations such as
American Express, Lloyds of London, Trulia, Dropbox, Capital One, Morgan Stanley, Visa, and Lending Club